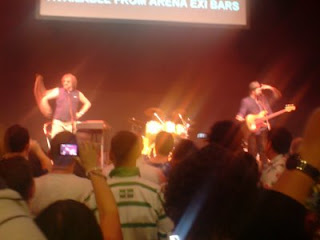 Well what a weekend! The Real Ale festival was great fun and Gordon, the Bruce Forsyth appreciation socity and myself had great fun sampling some of the 145 real ales on offer, we didn't manage to get through all of them! Gordon decided to chalenge me to a drinking competiton (not a healthy reccomendation I know) and insisted that we had to drink half for half and compare percentages, at one point he was leading by .5% but I soon regained the lead and anounced my victory, Gordon attemped to lay down another gauntlet but my victory was safe. As Gordon also weighs nearly twice as much as me I think I won fair and square. Chas and Dave (and Mick the drummer who is now in his eigties!) were superb. It was probably a good thing that the queues to buy beer were so huge as I consumed less beer that way. Big thanks to one of the Camra volunteers for recommending my beer of the festival - Cheddar brewery Potholer. My second favourite was Cotleigh Breweries Blue Jay. Cotleigh are a great local brewer who name all of their beers after birds of prey and also support the hawk and Owl Trust. 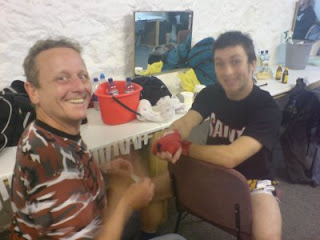 Sunday was fight day with Mick Kileen (pictured left) and Paul Rimmer(pictured below right) from Saints gym fighting at an event in Penzance. A large group of us piled onto the train to go to the event. It is the first time in ages that I have been on the train and I was very impressed. It cost us just £6.25 each (group discount, tickets should have been £9.50) for a return ticket and the journey took less time than travelling by car plus it is a very pretty journey. We were slightly dissapointed at the lack of a buffet car on the first journey but made the nost of it anyway by pinching Paul's sandwiches, unfortunatety they were peanut buuter on white bread, not my favourite but they were better than nothing. 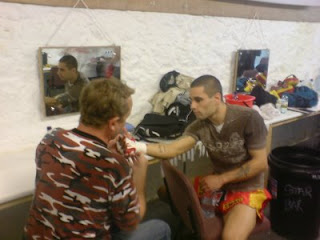 On arrival at the venue the fighters weighed in and we were gutted to find that Mick's opponent was 3 kgs overweight and despite some skipping he could not get his weight down to 73kg so the fight was called off. Paul's fight was still on and also on the cards was a fight between Taurus fighter Rob Hingston who also trains at Saints. We went through the usual rigmorale of hand wraps for the fighters, oiling, warming up, prepraring towels and gumshields etc before venturing out of the changing room to watch Robs fight. The fight was a kickboxing match of 7 x 2 minute rounds. I guessed that Rob won 5 out of the 7 rounds but was horrifed by the judges decision to award the fight to his opponent, Mike Nudd from Touchgloves gym. The crowd went mad and even the opponents trainer, Nathan Kitchen, admited tha he thought Rob had won the fight. The fight will now be subject to an equiry but this does not make up for the fact that Rob clearly won and was denied his title as a result. Even if the judges decison is overturned Rob will have to fight again to win his title. This was a truly terrible incident.

Paul entered the ring in confident fashon and clearly dominated throughout all of the 5 x 3 minute rounds, it was an A-class fight so included elbows & knees to the head. There was some blood as elbows do tend to cut the skin easily but the fighters were in good spirits and hugged each other after the fight. This is a really good win for Saints and for Paul and I look forward to watching Paul continue his Thai boxing career.

After the event we ventured to the local pub and celebrated the wins before returning to Plymouth on the train. I have to admit that we were a litle rowdy but the conductor was lovely and didn't complain too much about being hugged by Mick as Mick tried to stuff cans of beer into his pockets. Apologies to the other people on our cariage for the general drunkeness but all in all we were well behaved and in very good spirits. 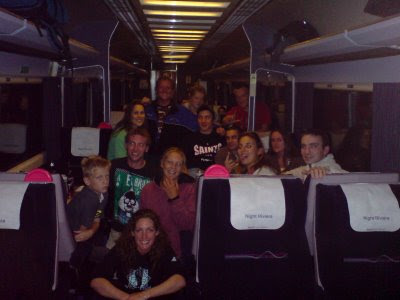 Today I feel absolutely shattered, as you will gather from Rosanna's & Jo's blogs we have all been feeling the effects of the Parkour session and what with a hen party to teach on Saturday morning and the trek to Penzance I couldl realy do with a day off, but no peace for the wicked as I am teaching for two hours tonight. My husband is also feeling the effects of working extra hard due to the expansion of his gym, hopefully we will be able to find time to have a day off together soon.

A quick whinge to Plymouth City council over their ridiculous new speed bumps on the main road around the hoe, I am unsure if my car will actually go over them and they seem completley over the top. What is wrong with getting a few officers out and about to tackle any boy racers rather than passing the buck (and cost) and affecting the motorists who don't cause any trouble. I have serious reservations about where this country is going and I have absolutley no confidence in Plymouth City Council or the current Labour governent particularly in light of the recent scandal of MP's expenses. The worrying things is that many of us don't even bother to vote ny more. Oh and to add insult to injury it seems the controversial new Life centre, which I strongly disagree with, will be privatised. Something needs to be done to stop this blatant abuse of responsibilty by those who are supposed to be looking after us.

Sam x
Posted by sam@theartofdance.co.uk at 07:13

It is wonderful that life is so busy and successful for you both - long may it last.

Thanks for the support Sam . It truly was awful what happened to Rob . The worst decision i've seen in 30 years in martial arts ! Congrats to Paul though who fought great .
Jimmy H (Taurus KB)