Should Tom Daley wear a wetsuit? 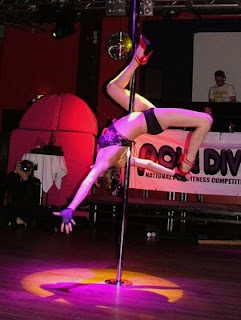 I became aware of plans to introduce the new bill last year and actually wrote to my local MP Linda Gilroy (she is one of the MP's who voted for her expenses to be kept secret!) to raise some concerns. I had received a newsletter from Linda Gilroy entitled 'Pole dancing', the newsletter was actually about a crackdown on lap dancing clubs so I was worried Linda had chosen the title pole dancing. I also mentioned to Mrs Gilroy that the crackdown on lap dancing clubs did not seem to address any of the real issues that surround such establishments. To further my worries I was informed that none of the MP's or councillors spearheading the campaign against lap dancing clubs had ever actually been into such a club or spoken to any of the girls who work at such places.

I received a letter from Linda Gilroy (pictured below apparently snogging the former prime minister Tony Blair- I joke of course although perhaps Mrs Gilroy was 'sexually stimulating the poor man and therefore she may need her own sexual encounter establishment license!)!) in January 2009 responding to me e-mail that had been sent on 10th December, she apologised for using the term pole dancing rather than the term lap dancing although she pointed out that "pole dancing is usually a pre-cursor to striptease in these clubs". Linda finished the letter by wishing me the best in my fitness pole dancing business. 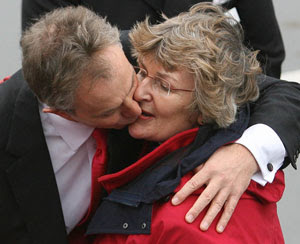 On Friday 26th June I went to the Equity meeting in London for the Equity Pole dancers working group and was horrified to learn that the policing and crime bill had already gone through parliament and that conditions within the bill could require me to hold a sexual encounter establishment license for my premises as I do more than 11 public pole dancing performances per year! here is the exact legislation that affects me:

Sex establishments
26 Regulation of lap dancing and other sex encounter venues etc
(1) Schedule 3 to the Local Government (Miscellaneous Provisions) Act 1982 (c. 30)
(Control of sex establishments) is amended as follows.
25
(2) In paragraph 2 (meaning of “sex establishment”) after “means a” insert “sex
Encounter venue,”
(3) After paragraph 2 insert—
“Meaning of “sex encounter venue”
2A (1) In this Schedule “sex encounter venue” means any premises at which
30
relevant entertainment is provided before a live audience for the
Financial gain of the organiser or the entertainer.
(2) In this paragraph “relevant entertainment” means—
(a) any live performance; or
(b) any live display of nudity;
35
which is of such a nature that, ignoring financial gain, it must
reasonably be assumed to be provided solely or principally for the
purpose of sexually stimulating any member of the audience
(Whether by verbal or other means).
(3) The following are not sex encounter venues for the purposes of this
40
Schedule—
(a) sex cinemas and sex shops;
(b) premises at which the provision of relevant entertainment as
mentioned in sub-paragraph (1) is such that, at the time in

The bill mentions live performances and this apparently applies to live pole dancing in a semi nude display and Burlesque acts who will also be affected by the Bill. So my first question hence the title of this blog is what exactly is semi nudity? At what point do I go from clothed to semi nude? Is Tom Daley (pictured below in 'full' sporting attire) semi nude when he dives at the Olympics, he certainly isn't wearing much and I wear more than him when I perform so how come I may need to get a license and he doesn't! OK so the Tom Daley arguement is a little tongue in cheek but it does highlight the point about exactly what is semi nudity.

(Before I carry on my debate I must laugh at the statistic I have just found whilst searching for aTom Daley picture and link, when you type Tom Daley in as a search term in Google you are given several search options, one of which is Tom Daley six pack which has 59,600 results but more disturbingly there are 6,100 result for tom's 'bulge' and 13,700 results for Tom's bum! - and you thought it was just pole dancing that aroused excitement!)

What is yet more amusing is the fact that on one hand I am registered with the governments Change for life initiative to tackle obesity, I am currently working with neighbourhood policing and have provided youth group sessions to the former Caradon District Council as well as exhibitions to the Womens Institute and other charity and voluntary groups but on the other hand I may have to hold a sex encounter establishment license? It simply doesn't make sense.

What is worse is that the new bill could be used to further restrict my work. Plymouth City Council have already put restrictions on a local strip club by stating that:

34. 34. Definition of all references to striptease, nudity, lap dancing, pole dancing and entertainment of a similar nature shall be referred to in these conditions as approved adult entertainment

38. There will be no external advertising or leafleting of the premises or any adult entertainment. They will cause no publication and display of obscene and indecent matter to be displayed or distributed in advertising performances being held at the premises. In addition opaque glass will be installed.

These conditions imply that all pole dancing is approved adult entertainment and that promotional material containing pictures of pole dancers is inappropriate. Burlesque artists are already on the case and are planning a Pastie Protest in London, the event is scheduled for 23rd July:

Quote from Shake it doll.com;"It has come to our attention that burlesque is not only been banned in the London Borough of Camden but under new licensing laws (SEEL), we will also be put within the same category as strip clubs and lap dancers….. Time to stop this…if not, then certainly stop it spreading to other boroughs. So rally the troupes! get your pasties, pants and placards and march with us on Camden High Street! The press have been informed! N.B: if you’re not willing to get arrested for your art then feel free to wear more than just pasties and pants :-) ."

If you want some further reading then why not try this American psychologys students essay on my performance at South Devon College or the recent Guardian Article about the current Burlesque debate.

So perhaps it is now time for a pole dancing protest to prove that we are not all sluts of Satan, we are not out to degrade women, we recognise pole dancing as a great way to boost our physical and mental health and we will not be told by our government that what we are doing is wrong. Remember that the MPs' that have passed this bill are the same people who have claimed ludicrous expenses so exactly who is the wrong doer here - us or them?

I have planned one individual protest in London that, if I get the relevant permission, I will blog about later.

I could carry on ranting about this subject for some time but I think you get the general idea, I will keep you posted on the ongoing arguement and hope to write a more cheerful blog soon. I will leave you with a video of two guys showing exactly what a show of strength pole dancing can be, the video really gets amazing at about 1min 08 secs.

Sam x
Posted by sam@theartofdance.co.uk at 05:25

About the video...shoulder mount climb!!! Ahhh! I never thought of that happening, let alone be possible. Amazing.

The SM climb is pretty impressive but for me the best bit is the parallel handstands with the hip rotations / leg circles - sheer strength. Best I get some serious pole practice in! Sam x

Sam do you have a link to the full wording of the legislation? Do you know how it might be different within each council area?

I can't find the link off hand and heard yesterday that there has been another amendment to the bill which may have further detrimental effect for performance pole dancing, it is something I am still researching and will blog about when I have more accurate info.

You might be best to contact your local council to ask them what their stance is on the proposals?