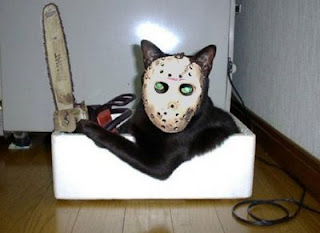 I'm back on the road to recovery and have beaten the nasty bug! it is great to wake up and not feel like death however my cat did not share my good mood and seems to have been temporarily possessed by the devil, this is quite a normal state of mind for my cat, I think she is feeling like the picture.

I wanted to discuss a recent comment that was left on one of my youtube videos that has upset me quite lot. Click here to view the video and see the comments. The lady concerned is basically saying that I am not a pole dancer and what I do is not art. She chose to describe me as an acrobat(don't have a problem with that bit) and said that I am definitely not a dancer (do have a problem with that bit). her comments got me thinking, I know that everyone is entitled to their opinion but I felt her comments were just hurtful. I have some more to say on this matter but am waiting for a response from her teacher first.

Good news for art of dance students, my Dad's garage, White's Auto Centre , has agreed to give all art of dance students 10% off any services or repairs they have done at the garage. All you need to do is turn up and say that you are an art of dance student! As well as offering the discount my dad has offered his forecourt as a venue for our September fun day to raise money for the Anthony Nolan trust. The event will be held on September 13th - full details to follow.

Tomorrow I am off to London with two fighters from Saints and my husband of course. Hopefully I will be reporting on two wins on Sunday after our return. Monday will not be a blogging day as Jo and I filming a World Class Instructional Pole dancing DVD so will be suitably bruised and battered by Monday evening.

Well now it is time for me to man reception, Rosanna is teaching tonight and we have hen party coming in later too! I have also received a load of new stock for my shop so will be sorting that out tonight. No peace for the wicked.

Sam x
Posted by sam@theartofdance.co.uk at 06:09

I think a lot of people leave not-so-nice comments online thinking that because it's not in person and they're using a pseudonym it will slip past. She sounds fairly narrow-minded and said some stupid things, but seemed to respond to replies with some kind of thought, at least. It could be that she thinks she's defending her own teacher's style, somehow, by attacking you. (The loyalty is pretty damn strong and goes both ways, you know!)If you've been in touch with her teacher (?) maybe a dialogue can be started and everyone can learn something.

I agree with trying to make positie comments rather than geting into a slanging match which is easy to do on the internet. Anyway onwards and upwards x x

I'm with Amy - people write all kind of crap in the internet that they'd never have the balls to say to your face. Her comments are misguided at best - she's clearly a student somewhere who feels she has a right to criticise those with more ability and experience, thereby revealing her utter ignorance of the dance form. As best you can, ignore her, dear one; I think you move beautifully - always have.