Miss Pole Dance 2008 from my point of view 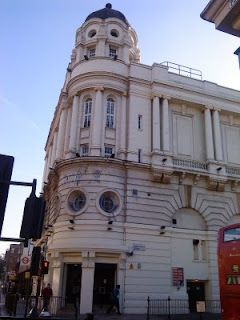 The run up to the finals of Miss Pole dance 2008 did not go as planned,Wednesday was my day of rest to clear my head before the competition but various events conspired against me including my chaperone Jo being taken very poorly - Get Well Soon Jo. By 10pm on Wednesday evening it was not only Jo that was unwell, I was sneezing, coughing and generally feeling like poo, I also managed to bash my finger on a door frame resulting in lots of swelling and bruising and a general inability to use my finger on the pole! As a result I slept badly making Thursday morning less than the best start for the national finals of a pole dancing competition.

With 2 hours before the train was due to leave and me in floods of tears desperately wanting to pull out of the competition I called my mum to ask her to accompany me to London which she did, Sid reassured me that I would be OK and that he would support me even if I did pull out which if course I refused to do so off we went, accompanied by the BBC crew, to the station. On arrival the air of doom started to shift as Suzy announced that we couldn't film in standard class so we would have to move to first class. Things improved from there on, a first class ride to London with free refreshments started to lower my stress levels.

We caught a taxi straight from the train to the venue, Scala - see picture above right - , and rushed inside to check out arrangements. I was pleasantly surprised to be greeted by Pantera and then treated to a professional hair do by Staffords of Soho, I didn't catch my hairdressers name but she successfully straightened my hair giving me a fab new look - I almost didn't recognise myself!

One of the great things about being part of Miss Pole dance is catching up with various people from the industry, it was lovely to see the gorgeous Glamour puss again and to meet people like Tess who I have only chatted to on forums. I also got to see the lovely Deb Riley - 2006/2007 runner up, Amber Rosia 2006/2007 runner up, Lisa Williams 2007 runner up, Tracey Simmonds - 2006 winner, Leanne Rostron & Jolene Whiting as well as meeting new friends such as Melissa Ranford. Poor Annie Norris was feeling unwell so didn't participate this year but will be in the finals of Pole Divas. Sally Ann Giles was also unable to attend but will also be at the finals of Pole Divas. I must say that I noticed a distinct improvement from Jolene Whiting since I saw her perform last - nice one Jolene. As I mentioned in yesterday's blog Alesia was just mesmerising to watch but for me Tracey stole the show. Debs put on a great show but I actually was a little disappointed as I know she can be so much better, unsure if she found the pole a little slippy? Don't get me wrong she is one talented pole dancing lady. I will post some video links as soon as I have them and am sure the DVD will be amazing.

Two small criticisms of the show, firstly the Burlesque acts were truly awful, I have seen many burlesque acts in my time but now it seems that people think Burlesque is just taking your clothes off: there is so much more too it than that! My other criticisms which I will raise with Pole Passion was the two Olympic judges, apparently they had never seen pole dancing before apart from in clips on the TV. At a national level we need judges with pole dancing knowledge and experience. Apart from that the night was amazing and I can't wait to enter again next year. The BBC3 crew who were with me hope that the event will be televised in Feb / March but I will let you know when I have something more definite.

Whilst am on the subject of competitions I wanted to give you a quick update on Miss Pole dance Australia which was won again by Felix, check out this video - see the clips towards the end of the super strong and bendy Felix in action plus check out these pictures.

On Friday my Mum and I had had a few hours to take in London, we popped to Charlton Street market so I could buy some gloves as I was freezing. We had both slept badly and were both very tired, we enjoyed some lovely lunch in a fab health food shop selling gorgeous chickpea and hummus pumpkin seed rolls and smoothies. We also wondered through the gardens of the British Library where I took this picture of 'Newton' after William Blake by Eduardo Paolozzi 1995: 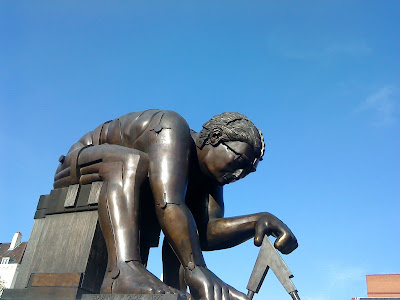 After what seemed like an eternity on the train my mum and I arrived home and I was finally able to get a good nights sleep. I will post some pictures and videos from the comp ASAP. Thanks again to my Mum for stepping in at such short notice and for being an absolute star as always. Also great news in that Jo is feeling better and will be back misbehaving again very soon.

Sam x
Posted by sam@theartofdance.co.uk at 12:29

thanks for the update....looking forward to the videos including yours. sorry to hear of the stress before the competiion but glad you chiled

I think you did really well - it was a HUGE crowd!