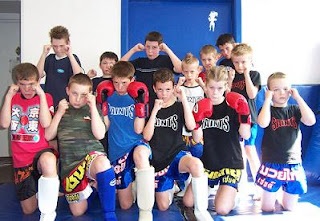 I was horrified today when my Husband drew my attention to articles in The People newspaper and News of the world on children doing Muay Thai. The article has come about due to the pending Channel 4 documentary Strictly Baby Fight Club, the programme seems to have focused on over zealous parents rather than actually looking at the Muay Thai practice and discipline itself. I hate the current wave of scandal based TV programmes that have little factual content and instead use clever editing techniques and extreme subjects to provoke reactions from their viewers.

The problem is that this documentary and ensuing news reports are now calling for an abolition of children's Thai classes despite the fact that it is an extremely safe sport. OK so there are always going to be bad gyms and trainers and pushy parents but that goes for any sport and in some ways I would rather see Kid's pushed into fighting than encouraged to stay in their bedrooms watching TV and eating junk food.

It is ironic that only two days ago I was blogging about the fantastic talent and dedication of Christi Campbell and yet today a Tory MP is vowing to get Muay Thai banned and others are talking of reporting the sport to social services.

The News of the world has even quoted my husband despite the fact that he had declined to be involved with the documentary. Check out the comments section on the story. Hopefully most rational people will see through the blurred image of Junior Muay Thai portrayed in today's media and will recognise that generally in Britain Thai boxing is well regulated and as a result many kids get the chance to overcome their fears, get fit, respect others and improve their social skills. All comments welcome as always.

Sam x
Posted by sam@theartofdance.co.uk at 08:44

Idiotic scaremongering &^!$!"^%s! They malign a sport for the entertainment of the masses - it doesn't have to be Muay Thai (but it's a good one, being both foreign and violent) it could be anything that young children are being'encouraged' to do by hyper-zealous parents.

I did Tae Kwon Do when I was about that age - nothing exploitative about it - yes, there were some psychos in the class, but we were taight to build self-esteem and courage, not to go and kick the crap out of some other kid in the playground. Edited 'correctly', I'm sure it would have looked just as bad.

And I'm sorry but The People is both moronic and obnoxious, a tabloid rag without any sense of morals or taste.

My thoughts exactly! p.s. I am with you on the darth thing too!

This is being promoted as a sport, Im told that the full footage of it shows a very different picture than the documentary. Its on youtube at http://strictlybabyfightclub.com/
at the end of the day I guess we will all make up our minds on what we think. Maybe the documentary is a bit one sided.