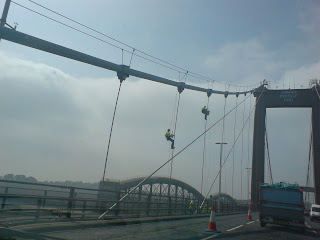 Firstly a quick picture taken whilst on the Tamar bridge yesterday ( I was stuck in traffic and was not using my phone whilst in transit), I was impressed by the agility of the guys abseiling - very impressive.
I have been meaning to write this blog for a week or so but other events have delayed my writing. It follows on from a conversation with my Grandad about what my business does and why. At first I thought my grandad was just demonstrating signs of the Alzheimer's which is affecting hm deeply but then I realised his question was a genuine one - why am I teaching people to dance? He explained that when he was younger people didn't need to pay to keep fit as their lives were more active, being in the Navy meant that keeping fit was part of the job for my Grandad and outside of work time off included dancing socially or playing tennis - not for fitness but for fun.
It is interesting how things have changed and it also raised a few other questions about whether things were better in my Grandads time? My thoughts were provoked further after the need to purchase a few picture hooks for the studio, I didn't want to go to one of the larger stores and unfortunately there are no nice little independent bits and bobs stores on Mutley any more selling. I remembered Read's DIY store at Lower Compton, it was somewhere I used to visit as a child and I was surprised to find it still there, even more surprising was the fact that it is now owned by a friends husband. What was great was the fact that I could buy two picture hooks without any packaging or without having to buy 100 pieces, what was even more outstanding was the traditonal customer service where customers were greeted by name and addressed as individuals, each customer was given time, not rushed and made to feel cared about, One elderly lady seemed happy to have the chance to talk about her husband who was obviously seriously ill., this is not something that would have happened in a larger store.
So where am I going with this blog? I am thinking community - a concept that appears to be becoming extinct but something that I feel is essential to one's mental health. None of us can survive without support networks for many of us that means family but for others it means their friends and neighbours. A recent documentary highlighted the fact that some people don't even know their neighbours let alone speak to them. This is why the small conversation between a shopkeeper and his customer seemed so important. For the elderly lady concerned it may have been her only point of contact, who else was going to notice if her milk wasn't taken in or if the curtains remained shut.
I have more to comment on this subject but am meant to be manning reception so will have to disspear off and finish my comments later!
Stay Healthy,
Sam x
Posted by sam@theartofdance.co.uk at 09:12