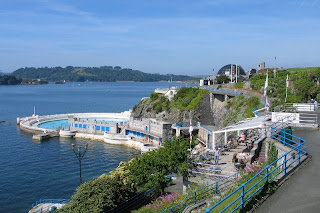 Today is a good day, the sun is shining and Plymouth really looks at its best, in addition to the lovely weather I have received two particularly interesting e-mails: One of my students Penny Scaffold sent me a link to her new project Secret Plymouth, It is project that I think is fantastic for promoting Plymouth's hidden gems. I think I will vote for the coffee shack as it is my favourite place to sit and watch the world go by.

The Second e-mail was to say that I had won the international body weight culturist of the month award for the body weight culture website. I had come second in the past but first prize involves means a cash reward!! Lets just say that my mental heath is very good today, lets hope my physical health is as positive. In less than half an hour I have a film crew from Nuts TV coming in to the studio to film me for a documentary on the Pole dancing industry. I have made it very clear to the film crew that I am from the fitness side of the industry and not the glamour so I will not be posing for any cheap titillating shots.

I hope the programme is edited fairly so I can get my viewpoint across. I will let you know when the programme is aired. I also hope my muscles allow me to do my best Pole tricks today as they are feeling a little sore. Too many shoulder mounts on Wednesday!!

The sound of the buzzer at the gym indicates the arrival of Cameron and his team so I will disappear off and report back later. Don't forget to vote for Secret Plymouth!!