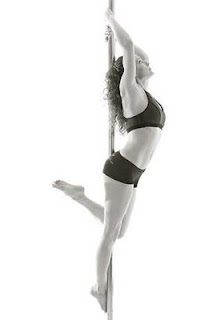 Yesterday afternoon saw myself, the Lordette and Tamar hanging around naked on a pole for several hours, as you do! The reason for our antics was due to a local artist deciding that we would make great models for her end of year project. Kasia Andrews is a fantastic artist who is training at the Plymouth College of Art & Design, she contacted me several weeks ago regarding her end of year project stating that she had seen some pictures of us on facebook and wanted to paint us on a 6 foot canvas. The life size images will be painted in oil and should look fab. I forgot how hard it is to hold some of the poses that we do. I had the 'pleasure' of holding the figurehead pose (see left) which is a bit of a back breaker, Jo did a crucifix variation 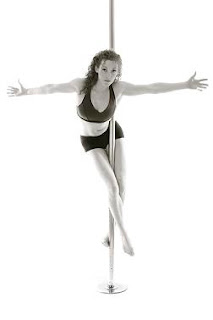 ( below right) and Tamar did a Mantis variation.

(below) We are all more than capable of performing these moves but holding them for long periods of time is seriously knackering and has taken its toll on my right shoulder. This afternoon I have the please of an hours sport's massage to help my muscles recover before tomorrows performance at Annabel's. If you want to see more of Kasia's work she is exhibitng at The Flavel in Dartmouth this next weekend, 29th - 31st August.

Some of you may remember that the art of dance are proud silver sponsors of the man in the red scarf, a theatre production about the life of the late artist Robert Lenkewicz. The production is the brainchild of Executive producer Jojo. The production will be showing at the Barbican theatre from the 9th to the 20th December, Tickets cost £10 (£8 concessions) and are available from the Barbican Theatre box office.

After Jo's return from Egypt she has smugly posted a video of swimming with Hammerhead Sharks!

I must dash of now for my sports massage before meeting my Mum for a curry at Raffles. Have a great bank holiday weekend,

Sam x
Posted by sam@theartofdance.co.uk at 06:57

You have great boobs.

For reasons of ignorance and politeness I shall stay away from the discussion about who has the nicest breasts or better nipples.
However, this was a very interesting post, plus I have just noticed the videos in the sidebar. So far I have watched, with great interest, "make me a pole dancer" and the WI one. Perhaps because I am a very overweight man, I just cannot understand how you can climb up the pole, as if there were steps on the side, or stay up with just one knee wrapped around the pole.
I have great admiration for your art!

Glad you like the videos, we will be posting more soon,