For those of you who are expecting this blog to follow on from the debate on my previous blog then you will be disappointed, to be honest although I am still a little angry with the way that the Herald used the headline of 'pole-dancing' in such a scandalous way I have also had plenty of other things to worry about so I will follow up the pole dancing debate another time. Also as the saying goes all publicity is good publicity! 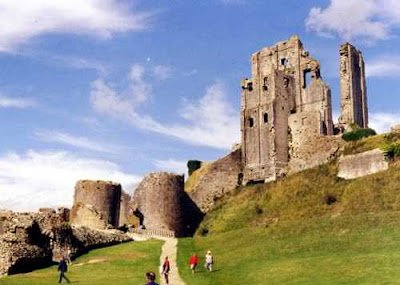 On Thursday I visited the beautiful village of Corfe Castle (Castle pictured above) in Dorset with my Mum, whilst there we had lunch with my great Aunt who is now 88 and looking great for it. The outing held mixed emotions for me as it was the day before our 'Family Chat' ( I will come to that later) and as great as it was to See Betty (my aunt) it was also tinged with sadness as she talked about the problems of growing old and the increasing isolation she faces. Betty has been active all her life and she now finds that living on her own is becoming a problem yet she doesn't relish the idea of going into a home. The subject of aging is part of the family chat that I will come to shortly. Despite any worries the lunch with Betty was actually lovely and it was good to catch up with such a great lady.

Friday was the day of the 'Family Chat' and involved My Mum, her three brothers and myself attending a meeting to discuss the future of my grandparents. My Grandad has what we think is Alzheimers (it is almost impossible to diagnose Alzheimers without an autopsy) and is needing an increasing amount of care which at present is being provided mainly by my Mum, My Nan is not coping with the change in her Husband and the family unit has been breaking down somewhat as a result. I felt quite awful sat in a room ( a room I didn't want to be in for other reasons but won't bore you with the details) discussing my grandparents but knew it had to be done. One of the problems is that the NHS will not pay for care for Alzheimers sufferers as it not classed as an illness.

To cut a very long story shorts the 'family chat' went as well as it could have down with only a few tears and a general sense of agreement, we then joined my grandparents, great uncle, 2nd cousin etc for a lovely family meal followed by a return to work to face a pile of admin.

By 8pm Sid and I were ready to hit the town with our advertising banners (see below) and new PA system courtesy of Adwheels, blaring out the tune 'Jump around' by House of Pain we literally had people dancing in the streets, I just wish I had had a video camera so I could share the antics with you, this was just the pick me up I needed and hopefully it will bring new members to my Saints & the art of dance. 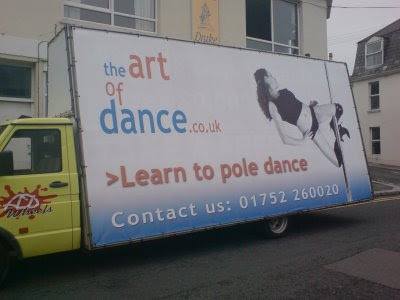 You can probably tell from the general tone of this blog that my mind is a little frantic at the moment, things are quite tricky financially, family worries have been playing on my mind a lot, my competitions are looming (the first one is next Saturday and my practice today was truly awful!), being end of the month it has been wages time and I hate doing any form of mathematics or anything involving Microsoft Excel, I have also been trying to find a little time to spend with my Aunt, Uncle and Cousin who are over from the States but time has been very limited. Tuesday sees the launch of the new art of dance Torquay venue which could potentially bankrupt the art of dance, Sid is having fun and games with his business expansion and generally I always seem to have 101 things to do all of the time. All in all I feel like I need a holiday but with no spare cash or time it is not going to happen. Still, things could be an awful lot worse!

If you are reading this prior to 8pm on Sunday 31st August then you may want to visit the 24 hour fund-raising event happening at the Seymour Arms to raise money for Archie Barton who contracted Meningitis B at just 18 months old and lost both his legs and part of his finger, ear and nose. Just reading Archie's story makes me feel like all my problems are really insignificant. if you can't make it the fundraiser then you donate online here. I am hoping to pop into the Seymour later for a few drinks and have also donated some art of dance gift vouchers as Raffle prizes. 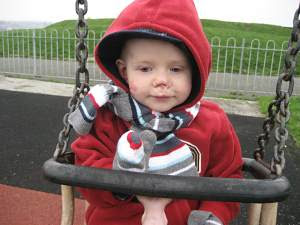 Sam x
Posted by sam@theartofdance.co.uk at 09:04

How is Alzheimers not classed as an illness?! That's outrageous. It is fantastic, though, that your family does have that Family Chat time - so many don't and important things go undiscussed.
Big hugs, if I can help you out at all just ask!
xx

Sam, so sorry to hear it is getting to that stage with your Grandad. My Gran had Alzheimers. It is so hard on all the family especially for the person who has it as they become so distressed on confusing days and mortified in clear spells. I sat with my Gran through so many conversations when she thought I was my Mum because of the era her brain was in. She was in Mount Gould hospital for a long time, when my 82 year old Grandad could no longer cope, under the pretence of 'assessment'. Thinking of you and your family, take care. Sandra K.

Very sorry to read about your Grandfather. I will describe some of my experience (you know my e-mail address if you want to discuss things further).
My wife started to become confused when she was in her early fifties (the disease appears to evolve much more quickly in its "early onset" flavour). We were referred to the brain specialist who thought that she might have had a small stroke (but eliminated that possibilty after a scan). It was thought that problems with the thyroid gland might be an issue, but the drugs didn't help.
A couple of years later we got to the stage where she would leave the lounge to go to the toilet and be unable to find her way back.
One important thing that need s to be done (and probably the sooner the better), is to call Social Services and get him assessed. When we did that with my wife, they were surprised that we had left it so long. Unfortunately, the quality of service seems to be very different between local authorities (we were extremely lucky to be in Bracknell, because they worked really hard for us). I couldn't afford to give up work at 56, and things rapidly got to the stage where she couldn't be left alone in the house. So they found her a daycare place (my social worker had to fight hard because they didn't normally take people younger than 65 at that centre). About 6 months later, the resident Doctor decided that we couldn't cope at home, and the daycare place couldn't either so she was admitted to a psychiatric ward, and move to a specialist nursing home after a few months. She died around six months later (as I said before the disease can be very fast in a younger person).
To summarise, your family should contact social services and get an initial assessment, and get in touch with the local Alzheimers support group (I got a lot of useful advice from them).
Best wishes and many, many, hugs.