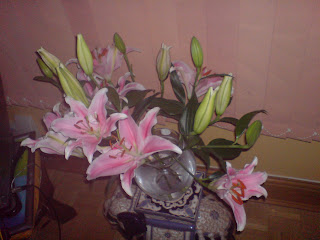 Thursday was spent gathering objects for my new aviary and BBQ, My husband and I had ventured to Stax Reclamation yard and bagged some bargains including a 100 year old chimney for the built in BBQ. As you can imagine shifting bricks, soil and wood provides a great workout but does not result in nice looking hands! The journey to Stax should have bee an easy one but thanks to an accident on the A38 closing the eastbound carriageway we incurred much delay.
Then came the news of the attempted attack on Exeter, it sounds naive but you just don't expect things like that to happen in the peace and tranquility of little old Devon. We had seen the RN bomb disposal van racing off up the A38 towards Exeter and then had been shocked, when driving through Stonehouse to drop the van back, that the accused (and injured) had been living in King Street. The following days events in and around the Drake Circus shopping centre and North Hill seemed even more surreal, I am just glad that no one else was hurt. 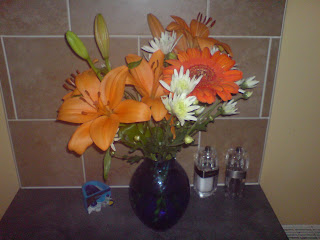 Friday was the day I needed to be towed to a garage and believe me I never want to be towed again ( I have since been told that my actions were illegal as I did not have a fixed tow bar - Whoops!), being told is like driving without any control, O so I had brakes but being just a few feet from the car in front scares me and the fact that at one point my tower (is that the correct word?) forget I was behind him and tried to overtake another vehicle added to my tenseness. Anyway all ended up OK and my car is now going like a dream - new clutch and shiny new gear knob- Thanks to my husband for the clutch and my mum for the beautiful new gear knob.
Saturday saw a visit to Moor and More Beer for some essential bank holiday supplies, worth noting were two new Otter Brewery beers - Beautiful Daze (a light summery beer - 4.5%) and Otter Head ( not suitable for afternoon drinking - 5.8%). Oh and of course I should mention that yo should drink with caution, check out the drink aware site for alcohol advice.
Something else worth mentioning is this Mays innocent smoothie of the month packed with pineapple, blueberries and ginger - absolutely gorgeous. 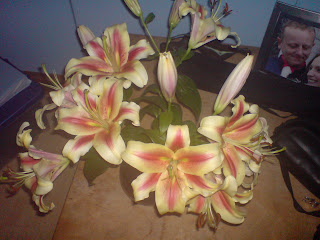 You will notice various floral pictures adorning today's blog, they are some of the lovely bouquets I was given for my birthday.
Well it is back to work tomorrow for some serious pole raining as I have a few exhibitions looming so I will look forward to blogging later in the week.
Stay Healthy,
Sam x
Posted by sam@theartofdance.co.uk at 06:24