Healthy eating and other whinges. 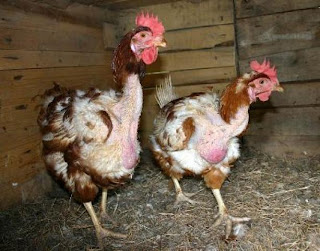 Well this week has been an interesting one especially after Delia Smith decided to speak out in support of battery hens (see picture left) and against organic farming, the papers did exagerate the headlines slightly making out the Delia was condoning battery hens when in fact later in her interview she went on to say that she would prefer not to buy eggs from or eat battery hens but she felt that it was every person's right to be able to afford cheap meat. I tend to disagree with much of her arguement especially her comments on food miles. You can read more details in on the Telegraph website.

The problem seems to be that we are being exploited by our interest in fresh local produce and organic food and the supermarkets in particular seem eager to label their products organic (even if not all the ingredients are organic) and to hike the prices up. The safe bet is to shop at local farmers markets where you will not pay over the odds and will be guaranteed freshness. You may find the big barn website helpful in locating farm produce and getting advice on what to buy. The site has been set up by Hugh Fearnley Whittingstall to help promote local and organic produce. You may also want to visit the website of Leigh farm, a family run farm that has been operating since 1875, They have a regular farm shop that is held at Roborough Village hall on Thursday to Sunday and sells produce from their own farm as well as other local producers such as Quickes traditional, Pymans pates and Mike's Smokehouse amongst others. It is great to buy fresh produce as you can not only taste the difference but you know the produce does not rely on artificial preservatives but will contain maximum nutriton having not lost any goodness through ageing.

Whilst I am on my soap box I must again air my concerns on the proposed life centre to be built at Plymouth's central Park. I still maintain my arguement that there are much better ways to spend 44 million pounds within the city and the money should be distributed amongst smaller schemes to maximise opportunities across Plymouth rather than just ploughing all the money into the life centre. Can you imagine if the council identifed 176 groups across the city such as youth centres & sports facilities and gave each group £250,000 to improve their current facilities. I suppose that it is almost the same arguement as the farm shops in that we should be supporting the smaller farms that make a difference rather than supporting the supermarkets, if you do have any objections against the life centre or against the idea of losing valuable green space from Plymouth's Central park then visit the friends of Plymouth website.

Since when did food become a right? If that's the case, then surely much of the Third World has a 'right' to demand it, too?

The supermarkets are fleecing bastards, but in a country of runaway obesity, an abundant supply of cheap food doesn not appear to be the answer.

Historically, meat was a luxury, and it is only since the end of the Second Worl War that we have come to believe otherwise. Personally, I'd like to see a return to that mentality, especially as we have so many other ways of achieving optimum nutrition.

Delia was way out on this one.

If you can't afford it, you don't get to eat it!! What part of that is confusing?? If I can't afford the steak, I don't buy it - I don't throw a tantrum about my 'rights'.
Poor hens. I would love to rescue some battery hens and turn them loose in my (hypothetical) back garden so they can recover and be happy. Bawwk!

I haven't put much stock in Delia since the hilarious drunk-football-shouting incident...