Remembering the Pirate of Mutley

This blog has taken me just over a week to actually write, I tried to write it last Tuesday but just couldn't get the words out.
It was last Tuesday afternoon that I discovered a good friend had died, his body was found just yards from my workplace in a Mutley Service Lane. I had been aware of the large police presence so went to be nosey and see what had happened, I was then informed that Brian AKA 'the Pirate of Mutley' or the 'Dude with the dog' had died. 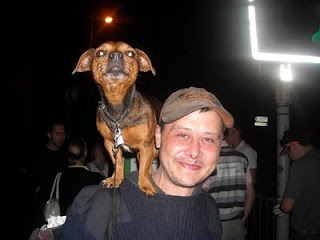 Brian had been a good friend who I had known for many years, he had chosen to live rough after a series of tragic events left him unable to understand the rat race we seem to live in. One day he left the house he owned, shut the door behind him, posted the keys back through the letterbox and took to a life on the streets with his beloved dog Bella AKA the 'Rattweiller'. Some of you may remember my previous blog about a night with Brian where I referred to him as Bill for obvious reasons.


Brian had been unwell in the weeks before his death with a worsening chest infection that had left him coughing and vomiting, I had repeatedly asked him to see a GP and he had joked that if he went he would make sure he saw a female doctor and get a full physical examination as he could do with some female interaction of a personal nature! I won't describe the full conversation but it did make us both laugh.
I have, like so many, fabulous memories of Brian from the time we lived together in Keyham with Rich to the many days and nights we met on Mutley and North Hill. Often, when I finished work I would buy Brian a sandwich or a portion of spicy potatoes (with ketchup, of course!) and buy Bella a sachet of her favourite Caspers selection.
I now dread walking through Mutley knowing that I will not bump into Brian again.
I am so pleased that someone has set up a facebook tribute site to Brian and so many people have made it clear how loved Brian actually was. I had promised Brian that if anything happened to him I would ensure that Bella was taken care off and I intend to keep that promise, her first food parcel is being delivered tomorrow and will include her favourite Caspers meal and some other lovely doggie treats.
I will never forget Brian and wish life had dealt him a few more chunks of happiness.
Stay Healthy,
Sam x
Posted by sam@theartofdance.co.uk at 11:56

R.I.P brian u were a good friend and are surely missed mate. . now u are free and will suffer no more. sorry that i will never get to see u again and being able to talk to you. . cya soon mate.