An evening with 29 commando 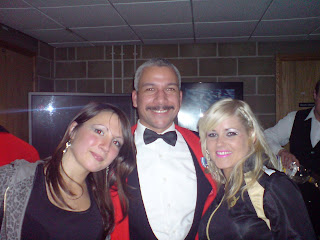 About a month ago My Husband and I were approached by 29 commando (based at the Citadel in Plymouth) regarding an amateur boxing event to be held at HMS Drake, the event was being organised as a welcome home for troops who had been serving in Iraq. Although I do not agree with the war in Iraq I fully support our troops who had no say in the decision to invade Iraq and who have served us proudly throughout.
My Husband and one of his trainers Carl Robson from Saints ABC provided two fighters for a demo bout at the beginning of the night and My husband and I provided two ring girls to give the lads some extra entertainment. The organiser - Carlos- seemed happy being pictured above with Tamar & Nikki who were the two ring girls for the evening.
The show featured 10 bouts and was watched by approx 330 members of 29 commando all in full military attire. The amateur boxers fought hard and displayed their fitness and passion. I was moved by the post-interval ceremony which involved giving out honours for bravery for those who had fought in Iraq. The stories were amazing and I couldn't believe the level of courage displayed in terrible times particularly in the Helmand Province. I think it is easy to forget how many people have lost life in this awful war and also how many people have survived but have been left with debilitating injuries.
It was an eye opening night (especially being surrounded by 330 men in uniform and being one of only a handful of women present - what terrible hardships I have to endure). Thanks to Tamar & Nikki for representing the art of dance agency in such a positive way and for cheering the lads up immensely and thanks to Carlos for organising such a brilliant event. I will be posting more pictures from the night on my website ASAP.
Stay Healthy,
Sam x
Posted by sam@theartofdance.co.uk at 06:54