The problem with pole dancing? 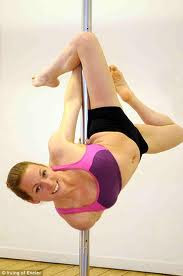 I have been trying to get my head around the exact problem with pole dancing; what exactly is wrong with those 2 little words pole+dancing that drives the media into a frenzy and makes people come out with very strange and often inappropriate comments. I have been pole dancing since 2004 and the stereotypical comments I often receive are now starting to wear thin.
When I say I pole dance I don't need someone to ask me which club I work in and I don't need some guy to offer to 'grease my pole'. I consider myself to be a gymnast and a performing artist so why have I received hate mail and death threats from all over the globe when I have demonstrated my art to children?

How can my art exclude me from supposed multicultural events?
Why should I be banned from performing at my local Lord Mayor's Day when belly dancers and street dancers have been allowed to perform?

Why have I been excluded for the last 4 years from the 'inclusive Dance, Dance, Dance event run by the South Asian Society, an event that prides itself on improving community cohesion and tackling prejudice!

How can the Plymouth Soroptomists book me to perform at one of their meetings, call me out to do a risk assessment and then let me down at short notice because they have now decided my performance may not be suitable for them?
Why does local publication the Plymouth Shopper decide that I am an unable to advertise in their magazine as they only do family friendly adverts?
Why was I banned from performing at Marjon's Student Union after doing an extremely successful event there, the answer was apparently that pole dancing might incite violence! This answer came from a senior member of staff at the college.
The above are just a few of the many examples of prejudice and ignorance that I face on a daily basis.
Throughout my years of teaching and learning the wonderful art of pole dancing I have remained thick-skinned but over the last few months my patience has started to wear thin, especially after the most recent comments about my attempts to run pole dancing lessons for children between the ages of 12-15, Both MP Gary Streeter and a Mother's Union came out to attack my proposed activity without them having any real knowledge of what my classes were about. As my husband pointed out you have to question the intelligence of both parties if they feel they can pass comment on something they actually know very little about. 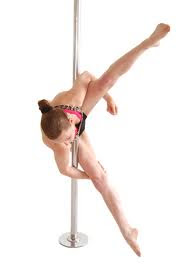 I feel the simple answer to my problems lies in educating the press and the government and getting them to use the correct terminology when referring to different activities, surely a dancer who works in a club is not actually a pole dancer as that is not where her revenue comes from, her revenue comes from lap dancing and stripping, therfore her correct title is a lap dancer or stripper, likewise a 'pole dancing club' is actually relying on income from bar takings and commission from the lap dancers therefore it is a lap dancing club not a pole dancing club. I have no issues with lap dancers or strippers and I respect their chosen career however we must differentiate between the 2 otherwise fitness pole dancer and fitness pole dancing schools will continue to be wrongly labelled.
This is not just about the personal feelings of fitness pole dancing instructors such as myself, if the correct terminology is not used in the correct places then I, and other pole dancers, could suddenly fall victim of the new laws on Sexual Encounter Licensing whereby if I carry out more than 12 public performances of pole dancing I would have to apply for a sexual encounter license. This is neither something I should be required to have nor is it something I can afford.

Here are some examples of the words pole dancing being used in correctly within the media; A recent press article in the Herald used the headline 'Banned from Pole Dancing' when the real headline was 'Lady banned from taking clients to her home'. A recent mail article accused primary school teachers of pole dancing in a club, these women were not pole dancing, they were drunk and gyrating against walls, tables and a column that resembled a pole, the headline and associated article should have been talking about their drunken behaviour and exotic dancing and not titled 'pole dancing'. 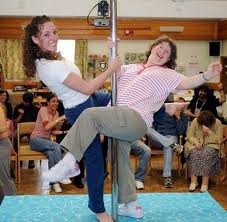 In an effort to help encourage people to use the words pole dancing correctly I set up a meeting where I invited local council reps, MP's and press contacts, the invites were sent on Monday 13th June yet 5 days later I have had no response from my local MP Oliver Colville, no response from my councillor Chaz Singh, no response from any of the BBC or ITV contacts and a decline from MP Gary Streeter and the Plymouth Lord Mayor. The only positive response I received was from Bill Martin, editor at the Herald and Jane Atwill from Radio Plymouth.

Of course there is another argument that pole dancing can be sexy which I would agree in some cases but then any form of dance can be sexy, you only have to look at the controversial history of dance to see how, historically, dance has faced many criticisms especially from religious sectors. Check out Barbara's Ehrenrich's book dancing in the streets. The issue is that I don't teach sexy pole dancing to kids and most of my adult classes are gymnastic based so are far removed from their historical links to exotic and lap dancing. 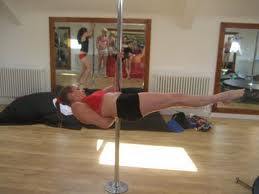 Within the last 10 years Salsa has emerged from being the 'dance of the devil' to being a mainstream way to keep fit. Kids can watch Salsa and tango dancers writhe in skimpy outfits on prime time TV on the BBC's Strictly come dancing but if I were to pole dance on TV at the same time there would probably be outrage.
It seems people's attitudes towards pole dancing schools spread beyond personal feeling or current legislation but also effect my business finances; my recent application to turn The Art of Dance into a social enterprise was laughed at by Companies House who sent me a very short letter stating that they could not possibly see how pole dancing could be used as an activity to benefit the community, this was despite my application being accompanied by a 20 page document filled with action plans, testimonials and examples of community projects.
Let's face it, if it's just sexualisation that everyone is worried about then there is plenty of overtly sexual material for kids to watch, just switch on MTV and check out the latest music videos or take a look at the latest kids fashions in high street stores. Let's not blame sexualisation of kids on pole dancing schools please. Take a closer look at female role models such as Jordan before you start to have a go at a fitness pole dancing class.

Perhaps I should change my career and take up something less controversial such as Maypole dancing where young virgins dance around a stick to celebrate their imminent loss of virginity (apologies for the sarcasm).
Well the debate continues and it seems that for most fitness pole dancers there is a long way to go before the ignorant and prejudiced are finally educated. Please feel free to comment and I will publish all intelligent comments - no nasty, malicious trolls please!
Stay Healthy,
Sam x

The nature of "Human Nature" is we have bias and prejudice as a result of our education, upbringing, the media we consume and social circles we frequent. And we sometimes forget how powerful and deeply rooted these can be so much so we do not question them. We accept these attitudes as fact in a 1+1=2 kinda way.

Anything that deviates from the "norm" will more often than not be treated with hostility, even thought the concept of normal/acceptable is absurd.

Outside the community, the only thing people know of pole dance it is that it's seedy. This view is seldom challenged because it's peddled explicitly by the Media and implicitly by the State & Religion. Overall, we trust these institutions despite the sometimes strong reservations we have about them.

The Media is a nasty beast. TV, Print and Radio content is decided by posh 40+ middle class men (Words of the BBC not mine!). When you add their bias with the need to SELL SELL SELL, you can imagine how distorted things can get especially now as audience and advertising revenue are in free-fall due to the internet.

To navigate outside the community, pole dancers need to be scientific with the words and images they use to construct their pitch. In particular, close attention must be paid to how these elements will interpreted by a wider audience if there is any chance of getting through to them. This will not in itself magically change perceptions but it will help prevent people entrenching further in their beliefs.

Let's deconstruct the thought process with these shots:
http://www.theartofdance.co.uk/images/stories/art_of_dance_banner.jpg

Polers will see skill and technique. Unfortunately, your MP or average teenagers parents will first and foremost be drawn to the PVC/leather boots and underwear: symbols that trigger connotations of sex, adult establishment etc etc... And no matter of much one may try to put a point across, those visuals take precedence and confirm what Media/State/Religion have told them.

That said, the work you're doing is fantastic. I think more dancers should help you shoulder the burden. If you need a 'Trojan Horse' to mount an attack on the System from within, holllaaaaa!!!!