After a fabulous day judging at the Bristol Pole Championships on Sunday and a seemingly long drive back to Plymouth in the early hours of Monday morning I was not keen to get up at 8am to view my neighbours pre-court hearing. However, after 10 years of neighbourly disputes I was determined to see his day in court and find out exactly what he had been up to aside from terrorising me and my fellow residents. The horror of hearing the 11 counts of rape and indecent assault against a 14 year old girl sent shivers down my spine and the fact that she now has to relieve the whole ordeal in a court room seems like a second round of torture for her, I just wish my neighbour had pleaded guilty to save the girl yet more hell. Click here to read more about yesterdays hearing. The trial is now set for March. 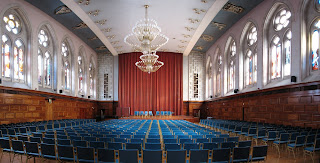 As I left the courts I noticed that blood transfusion vans outside the Plymouth Guildhall (pictured above) and decided to pop in and make an appointment for my free tea and chocolate biscuit and, of course, to give blood. Giving blood at the place where I got married was great, I laid on the donating table just 2 metes from the exact spot where I said my vows and enjoyed the added bonus of being able to count the number of penises on the statues that adorn the Guildhall ceiling whilst donating, definitely a worthwhile experience. 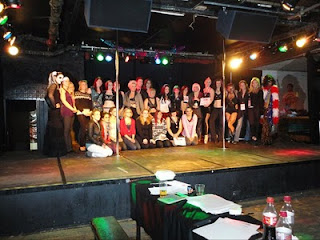 I mentioned the Bristol Pole Championships (see picture above of all the judges and competitors) at the beginning of this blog and I just wanted to say what a great, well organised and friendly competition it was, I am already looking forward to the 2011 event. A big thanks also to Rosanna for accompanying me to the event and being great company.

On the subject of pole dancing I should mention a poorly written article that featured in the Daily Star last week that I was completely unaware of at the time. My first inkling that something had been written was when I noticed a facebook update about me being in the paper, I was very confused and then saw anther few updates coming in mentioning the Daily Star, so I went to their website typed in my name and was taken straight to an article possibly written by an uneducated child about pole dancing in the Olympics accompanied by a picture of me with my name too!! As I don't own the image there is little I can do but I did have to chuckle at the poor content of the text which left me questioning the readership of such a publication. 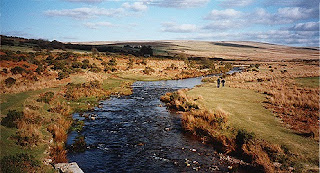 So after the court case, giving blood, the fortnightly cash and carry visit, some Pole Dance Community and art of dance admin it was time to drive up to a secluded spot near Cadover Bridge (pictured above) on Dartmoor to watch the Perseid Meteor Shower. Seeing a meteor was going to a first for me and it was quite fascinating staring out across the starry sky. I took a while for me to get my night vision but once I was focused I totted up about 6 or 7 meteors. My night vision was halted temporarily as the police arrived to see what my husband and I were up to, the young officer looked a little surprised that we were merely star-gazing rather than partaking in some illicit drugs deal or dogging activity. I thanked the officer for checking we were OK and then re-focused my eyes to see a few more meteors before driving home.


I will blog again soon about the Dance Event I have been meaning to review and the Plymouth Fringe Event planned to coincide with the British Art Show's Plymouth visit on September 17th 2011, if you can't wait for that blog then you must read Steve Clement-Large's blog to learn more.
Just a quick mention to any of you who normally read my blog via the This is Plymouth website, sadly the website has now decide not to host any of the blogs written by its army of bloggers and they have got rid of the business section. But, fear not, there may be plans to host the blogs on another media platform.....
Stay Healthy,
Sam x
Posted by sam@theartofdance.co.uk at 05:19

Thanks very much for giving my article a plug. Am looking forward to next year and can't wait to really get going organisationally from about March onward. And - fear not Sam volunteers will be used :-)