DVD's and more backlash from the recent press coverage

I have a small window of about 30 mins in which to try to catch up with some blogging. Before I update you on the South Devon College story and ensuing press coverage I have some news of a different nature: At long last Jo & I have completed filming for Volume 1 of the art of dance instructional DVD's. Our fab film crew from Weymouth (pictured below both in action and posing for the camera) worked with a 3 camera set up and sound person and included a fab glidecam as used in the filming of Alien! The DVD, which should be released in 2 weeks time will feature 4 advanced tricks (The Superman, The shoulder mount, The Cradle and the Elbow hold handstand or Ayesha as it is commonly known) as well as these tricks there are demos of variations of each trick and combinations too as well as bonus footage. I will let you know as soon as the DVD is on sale. You may want to watch the last video from the Weymouth team entitled " Make me a pole dancer" 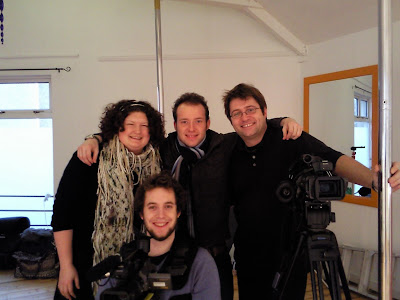 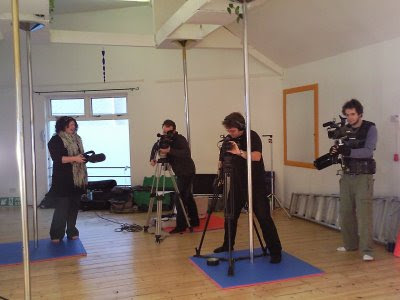 SO back to the South Devon College furore, to be honest I though that by now the story would have died a death but that is far from the case, the two videos on you tube are still receiving a serious amount of hits and one of them is up to 82,000 hits and the other is on 34,000.

The newspapers are still featuring the story via columns and letters from the public and once again the stories seem to be very supportive for the pole dancing industry. On Wednesday I went to London for another interview with the BBC so that they can update my pending documentary to feature the whole saga. Then on Thursday I was contacted by a New York news channel about doing an interview for them in the very near future.

The Lovely Jolene from Purity pole was featured on her local radio station and gave a great interview about the benefits of pole dancing, during the interview she praised my performance at South Devon College. You can click on the interview by clicking the link and then pressing the play button, you will need to give the download a chance to buffer and then go to about 70 minutes into the programme to hear Joleen's piece. Well Done Jolene on a great interview!

Also Thanks To Dana Mayer from rock n roll pole for this letter that she wrote to the Metro:

As a fellow pole instructor, I applaud Sam Remmer's efforts to teach pole dancing to teenagers. (Metro, Fri). The moves in themselves are acrobatic in nature and require strength. It is also a fantastic workout, working the arms, core, and legs.

I take issue with the problems school staff seemed to have with Mrs Remmer's demonstration. Pole dancing can be taught in such a way that the moves between the acrobatic poses are graceful, agile, and flowing --they do not have to be sexual or raunchy in nature.

More to follow on the ongoing debate about fitness pole dancing.......

Lastly I have 2 big hugs to send to two art of dance students, Firstly gorgeous Kim who is finally managing to walk with the help of a frame and may be home in about a week. Keep Strong hunny!

My second big hug goes to our talented Exeter Student Nicole Windley who left the art of dance studio in Plymouth at 8.30pm last night only to get stuck in the chaos on the A38, click here for the full story. Poor Nicole didn't get home until 6am this morning and then discovered there was no power at her house either. FAO Nicole, hope you have warmed up and got some serious sleep x

I will sign off now but may see some of you at our art of dance social at Annabel's tomorrow evening.

Sam x
Posted by sam@theartofdance.co.uk at 03:58

I think what has pleased me about the whole affair is that the coverage has generally been supportive of pole and the college look like reactionary fools.

But I'm sorry it's still causing you grief.