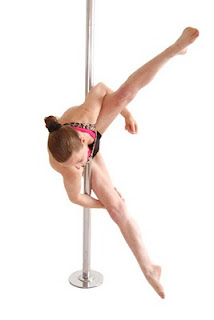 picture above of me doing the Extended Frodo (fao Josephine!)
Last night I had the pleasure, or should I say tough job, of judging at the South West heats of the PoleDivas championships in Bristol. I knew it was going to be a stiff competition with several ladies in the finals who all have the potential to win the finals.
On arrival I met several of the competitors, all from PDC approved schools, and was able to put some names to faces as I met Emily from Emily's Pole Fitness, Shelley Neave from House of Pole and Lucie Tutton from In the Shadows. I also caught up with more familiar faces such as joint competition organiser Robyn Rooke from 360 Pole Dancing (PDC approved school). Robyn was was busy multi tasking but coped brilliantly with organising and MCing - great job!  The lovely Varie Anderson, Professional winner of the South West heats of UKAPP, was busy ensuring all the competitors had filled in their PARQ's, got their music and knew the line-up.
I took my place on the judges table with fellow judges Pippa from PoleNastics (PDC approved) and Stacey from Stacey Pole (PDC approved). Stacey is of course also the sales manager at X-pole and a very busy lady! We were joined by officials Josephine Ford (the original  PoleDivas founder and organiser of the forthcoming Bristol Pole Championships) and Varie Anderson. The judging criteria this year for PoleDivas is tough but fair and the the scoring allows all judges to give marks for Technical elements (40%) as well as Presentation (musicality, choreography etc) and Performance (costume, stage presence etc). The official ensure that all the compulsory elements are included, anyone failing to complete a compulsory element receives a deduction from the judges score. The officials were extremely thorough, checking and double checking the scores and using the video footage of each performer to double and sometimes triple check that the compulsory elements were as they should be.
I have to admit that last year I had my reservations about the complex judging system but this year it seemed to run smoothly and all the judges agreed on the final placings.
The Amateur section was a tough call and I find it really hard to judge critically as these ladies have only been dancing for a matter of months an suddenly they are faced with a strict panel of judges, a large audience and the joy of dealing with performance nerves!


The finals scores were very, very close with Bex Brady from Spin City Pole fitness (PDC approved) taking the title and the place in the finals. I loved Claire's performance too, her song choice and style were perfectly suited and she definitely has potential.
Next up was the amateur advanced section for those who are advanced but not yet ready to take on the professionals. Thus years heat was won by last years Amateur winner Riina Laahanen, who has certainly improved, her trick packed routine kept us all entertained and she showed a great display of strength whilst looking like she was really enjoying her routine, this girl has so much energy!
I have to admit, as amazing as all the amateur were I was eagerly waiting the professionals and already had a few performers who I was expecting to do rather well. Starting the professionals heat was the lovely Lucie Tutton who was obviously very nervous, she said that she didn't expect to win but wanted to enter for her students, which I was thought was extremely brave and admirable. Lucie managed some good tricks within her routine and did her students proud.
Another performer who stated that she didn't enter to in was the fabulous Catherine Payne, a mother in her 40's who performed like a 20 year old athlete, strong, poised and graceful. Despite not winning Catherine and the Spin City girls must have been chuffed with the performance. 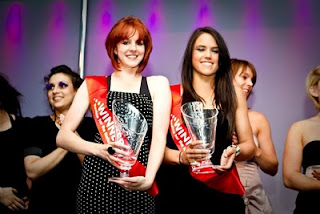 picture above of Amy Williams and Sarah Scott (Studio 22) winning the NSPDS routine for the Nation competition 2010.
For me the 2 acts that completely stole the show were joint winners Sarah Scott from Studio 22,(PDC Approved) and Jamie Alexah-Taylor from Defy Gravity (PDC approved). Both girls had completely different styles with Sarah opting for an urban routine with complex choreography and flawless tricks, Jamie chose the slow controlled option and completed the routine with effortless grace. The final scores left each girl with just 0.5 of a point between them resulting in the joint win. There is a video of Sarah's routine here but it is not great quality and doesn't really do her performance justice.

It was a sad night for former winner Annie Norris who narrowly missed out on a place in the finals lost her reigning title. It is so sad that anyone has to lose especially when Annie was still amazing. Annie has her own unique style but, like me, she suffers from tremendous performance nerves and I think the pressure of trying to retain her title proved too much on the night.

After the results were announce it was time for me to hit the M5/A38 and head home, I managed to get a brief chance to chat with the lovely Kate from Spin City as well as the fabulous Bendy Kate (UKAPP Expert  winner) and finally had the pleasure of meeting Alice Milner from Pole Dancing Bath (PDC approved). It was so nice to meet so many truly lovely people and a chance to make new friends as well as catching up with old ones.
A big thanks to everyone who made last night happen, the competition was well organised, fair and very friendly. Fair play to the audience too for showing the competitors the respect they deserved. Can't wait till the finals now!