Camping and other adventures 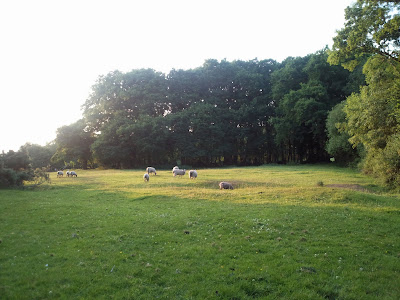 Life seems so busy at the moment that finding time to blog is limited, most of my time seems occupied with either the art of dance or the Pole Dance Community. Last weekend was the first weekend in ages that I didn't have work commitments so I was looking forward to a relaxing weekend. The Weekend did not start as planned as one of my neighbours decided that as he couldn't make it to Glastonbury then Glastonbury could have to come to Greenbank, he partied till 1am which was fine but then started again at 4am and by 6.30am the street had had enough, we must have looked hilarious as several of us piled out of our houses, dressing gown clad and very tired and vexed. After much door bashing and shouting, peace was finally resumed but it took two days for the swelling on my hand to go down!
Having had the Glastonbury scene forced upon us, my husband and I decided to go camping so we could do the tent experience without the deafening music. We packed the real basics and set of to find a secluded spot where we would not get arrested for trespassing. As you now local knowledge is always a handy thing so we stopped for a pint in the Royal Oak at Meavy to ask a few locals for some advice. A gentleman, sat at the bar, directed us to two spots where he said we would not be disturbed, one of which was located by the riverside which sounded perfect so after a lovely pint of Jail Ale we set of to park the car and trek to our desired spot.

The desired spot turned out to be just as we had imagined, I set up the tent on the edge of a meadow (see picture at top of blog) overlooking the river and surrounded by wood and farmland whilst my husband started making fire! Before long we were cooking jacket potatoes and strips of meat but we were not alone as we had originally thought; I set of to use my new toilet (the base of a tree) when I heard something behind me, it was the biggest pig I had ever seen and I had to stop and question if it was definitely a pig and not some dangerous wild boar and f it posed any risk which of course it did not. I was very glad we had realised we were on a pig farm before darkness had set as the noises that these pigs made would have scared the life out of me. 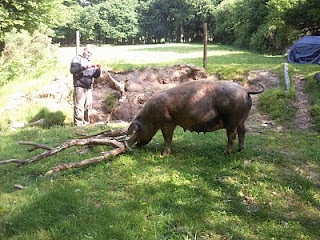 So, our company of pigs kept us amused throughout the evening and several of them slept close to the tent, after they had finished their hot jacket potato supper! It was soon time for me to retire to the tent for some much needed sleep with a slight detour as I fell over several rocks trying to find my way in the dark, the copious amount of ale had probably not helped my navigation skills! 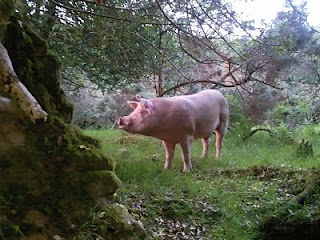 During the night I was very aware of how much sleep I was missing as the Meavy Church bells chimed on the hour letting me know what time it was, At 4am as I sneaked out of the tent for a toilet visit, the local sheep scurried away from the tent mouth and I realised that the damp had invaded the floor of the tent (should have taken a groundsheet). By 5am the sheep were back and a couple of the pigs were stirring apart from the large female to our right who did not surface till 9am (see picture below). 'Betsy' the dog also made a brief visit at about 8am before being called away by her owner. 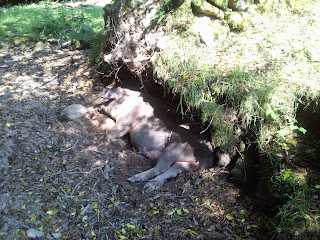 Sid started the fire again at 6am and by 10am and a little more sleep (not much!) we were ready for breakfast of hot egg rolls. We were both shattered and ready to pack up and go home - video to follow of my poor tent disassembly. 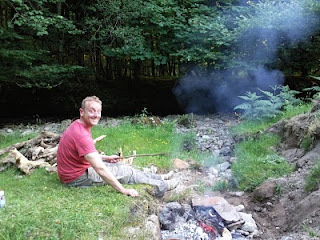 On Sunday afternoon, as I fought the sleep deprivation, I had the pleasure of an afternoon drink with my Lovely Mum at Chandlers, the view across the Sound was simply stunning and the temperature was equally pleasurable. Queen Anne's Battery is amongst my favourite Plymouth spots and is such a great place to sit and watch the world go by.
Anyway, enough reminiscing for now as work beckons, I have the pleasure of being a student in Hayley's pole class tonight which I am really looking forward too. More news to follow.
Stay Healthy,
Sam x
Posted by sam@theartofdance.co.uk at 05:04

and I must apologies to my lovely Sam for me being so grumpy - until the fire was lit, the food cooked and the beer kicked in :-)