The Re-opening of Devonport Guildhall

Yesterday I had the pleasure of being invited to the re-opening of the newly restored Devonport Guildhall (click here to view the Herald article on the restoration). I already knew that Mia and the team from RIO (Real Ideas Organisation) had been working hard to finalise the restoration and ready the building for this weekends series of opening events.

Obviously I have not known the Guildhall for it's entire 200 year History but I have known it for at least the last 25 years, I remember driving it past it with my Mum on our way to use the swimming baths at MountWise, I remember attending Amateur Boxing event there and watching my late friend Ashley fight there on several occasions. I also remember visiting a friend in the former Clowance Lane and returning to another friends car to find the wheels gone. My last memory of Devonport is from my time driving buses for social services, I ferried many elderly women from Devonport to their day car places in an old respite centre just off Outland Road, there were some fabulous characters among these women and I have fond memories of all of them.


So Devonport has undergone some major changes since my childhood memories and one side of 200 year old Ker Street is now just a pile of rubble waiting for clearance whilst the other side is proud to boast brand new houses and flats. Clowance Lane was also knocked down some time ago and replaced with modern flats an children's play area, a vast improvement from it's previous rough estate.
I must admit I had seen a sneak preview of the finished Devonport Guildhall but I was still excited about attending the tour at 7.30pm last night; On arrival I met a group of approximately 20 people on the steps of the Guildhall as we congregated around a tour sign. There were a few people who were familiar to me including an old work colleague from Social Services / NHS as well as a couple whom I have met previously as we are both proud Suzuki Cappucino owners. We were soon greeted by our tour guides, Rusty & Tamar, and several ushers. Rusty and Tamar divided us into two groups and our tour of this amazingly restored building began. 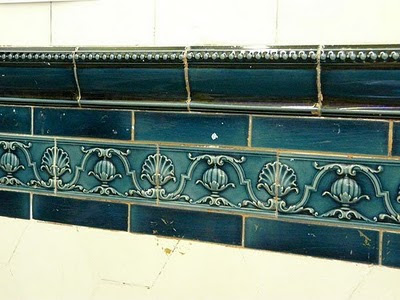 The Guildhall has been sympathetically restored and painted in colours reflecting it's 200 year old status yet with modern hints everywhere including the lovely glass screen reception area and of course who get forget the Boiler; the boiler has it's own special room and can be controlled externally from a laptop or -phone, it can change the temperature in each room and is probably capable of time travel too. The old cells have been kept as they would have been but currently house some great art from young artists at Tamarside Community College. 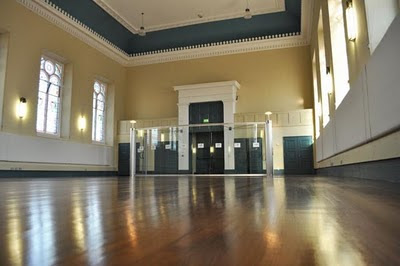 picture above courtesy of RIO.
We were guided through the various hot desk areas and offices of current Guildhall residents such as Chew TV, Zebra, Attik Dance and Coastnet. Click on the name of each company to find out more about each exciting project. After the tour it was of to the stunning Lord Mayor's Parlour where I sank into one of the classic leather sofas whilst being fed exquisite canapes from Blueberry catering, if you need a caterer then you have to try this company, the pea soup and blue cheese cream canape was just divine.
As we all relaxed in the parlour tour participants took part in a brainstorming session (I am sure that word is not politically correct any more but I can't think of the right word!) run by Zebra whilst I chatted to old Friend Korash from Chew TV and potential voter Ed from RIO. I also met a lovely couple from Stonehouse (sorry I didn't catch their names). We had a good discussion about Plymouth City Council faux pas including the neglect of the Old Palace Theatre in favour of the building of the current Theatre Royal, the abandonment of Drake's island which was subsequently sold off to Dan Macauley and now remains redundant and the general short sightedness of Plymouth planners.
The Devonport Guildhall has been set up as a multi purpose venue and can be used for anything from corporate events, dance workshops, martial arts displays, theatre productions and community events to name but a few. If you have an idea or would like to hire part of the Guildhall just visit their website for more info.


Anyway, to summarise I had a fabulous evening and I was delighted to see that everyone's hard work had paid off. I want to particularly praise Mia from RIO whom I know has worked incredibly hard to see this project through and is no doubt lacking some serious sleeping hours as result of the restoration.  Well done to everyone involved.
I must dash now to get some canvassing in before this afternoons open event at the art of dance to celebrate UK Pole Dance Day, pics and vids to follow.

Great article and news Sam. Although I was born at Flete House in the South Hams I did live in Devonport for a year in the early fifties and vaguely remember it was above a Fish and Chip shop at the bottom of Albert Road.

So nice to see all the regeneration there.

After 23 years away from Plymouth it is really nice to see all the changes going on :)