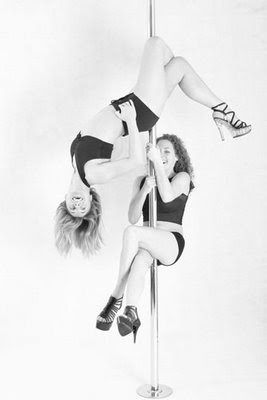 After our recent exhibition and talk for the Women's institute in Fowey here are our reviews courtesy of the Cornish Guardian: Fowey group -The subject for the Gribbin group's entertainment for the April group meeting was controversial and cause for much discussion. The then president Vera Trenwith's suggestion to book a demonstration of pole dancing was finally adopted, and curious about what they were letting themselves in for, on April 22nd, 67 ladies arrived for the meeting at the Fowey Community College.

In the hall a sturdy platform with a central steel pole stood behind the presidents table where Sue Buscombe, Fowey's president, welcomed Sandar buck, vice chairman f the Cornwall Federation; Nan Collier, our Wi advisor: and the other presidents in the Gribbin Group; Ann Jukes, standing in for Cuddra's president and also the group convener: Elaine Pearce, Tywardreath, and Gwen barberry from Polkerris. Business was soon dispatched, then Sandra gave us an outline of upcoming events and Nan described her training as a W.I. advisor.

After competition announcements Sue introduced Sam & Jo from the Art of dance, Plymouth. Sam & Jo explained that pole dancing is a modern take on 12th century and ancient Chinese pole work designed to train men to be warriors. At the Art of dance studios it is taught for pleasure and fitness. Girls go to them thinking that they are going to learn nightclub dancing: not so. When they find out what it really is they generally reject the sleaze and stay to learn the sport.

Jo demonstrated low intermediate spins, limited as she had recently had surgery, Sam, dazzled with graceful spins and postures on the pole- the splits and a stomach crunch from upside down to name but two. The lovely movements have names like the Knot (invented by Sam), flamingo and butterfly.

Both women are qualified fitness professionals and tremendously fit. The dance is aerobic and anaerobic and can be performed with or without any type of music, expressing individual styles. Jo's style is athletic and Sam's balletic. Indeed much of her work is reminiscent of aerial ballet which circus performers display. Pole dancing is suitable for all and the oldest person they have taught is 93. Despite stringent safety techniques there are hazards, and bruises are plentiful. There is as yet no governing body but work is in progress for a national and international committee. During a question and answers sessions a member described the demonstration as "beautiful- an art form".

Invited to have ago, three ladies (one at age 79) braved the pole, performing simple, graceful movements- feet firmly on the ground! I found it exhilarating and expressive, with the pole supplying stability. After all the excitement we really needed our cup of tea and delicious refreshments.

Competition results were: Craft- first, Doris Robbins, Polkerris; second, Paula Quinn, Fowey; third, Di Pomeroy, Cuddra; third, Margaret Neville, Cuddra; highly commended Paula Milbank, Fowey. Floral- first, Gwen Barberry, Polkerris; second, Pat Haberland, Tywardreath; third, Phyllis Curtis, Tywardreath. After the raffle was drawn, the evening ended with a short presentation by members of humorous poems (see poem below) performed by themselves. After a lusty rendering of 'God save The Queen' we left with smiles on our faces and much to talk about. -article by Pam Ellis.

Tywardreath group review: On April 22nd, 16 members attended the Gribben group meeting, hosted by Fowey W.I. We were introduced to the art of pole dancing by two charming young girls, Sam & Jo, who demonstrated the athleticism, grace and strength required to exercise on the pole. One or two brave ladies from the floor had a go as well!

Our thanks to Fowey W.I. for a very entertaining evening.

Here is one of the poems written by Mary Jones, a member of Fowey W.I. Mary mentioned that she had written the poem before the evening and had felt reservations about going to watch a pole dancing display so she hoped the poem did not cause offense, which of course it didn't;

The Women of the W.I.
A boring old lot you may cry
They cook buns and cakes
Without any mistakes
Such boring perfection says I!

They sing Jerusalem, make their jams
make outfits for babies in prams
They don't turn their noses
At small birthday posies
These boring, these sweet little lambs

By coach for a day to the sea
They say 'After you, before me'!
It takes so long to load
When they get on the road
It is time to come back for their tea

They are polite, they're well dressed and they're straight
Just look at us here, aren't we all great
These members of Fowey
Are all out to enjoy
These such simple pleasures, but wait.......

What is that thing I hear Vera say
I'm changing the meeting one day
To a real enhancer
We have a pole dancer
So get ready now, line up this way

When she struts her stuff as you see
It's as easy as ABC
With her legs a twining
And greasy pole shining
Are you shouting and screaming 'Now me'!

Cos ladies of W.I.
Open minded and legged, just try
Yopu can all have ago
And before you all know
You'll be swinging and swinging so high

But this fun just for this night
And it sure is an incredible sight
But let's not be haughty
We can't do the naughty
We'll go back to what we do right!!!!!

Thanks to all the ladies at the W.I., particularly Vera Trenwith of Fowey W.I. for having to the courage to book us and Liz Moir from Golberdon W.I. for getting us involved with the W.I. in the first place, more news to follow....

Sam x
Posted by sam@theartofdance.co.uk at 04:51